**PLEASE NOTE**
Due to a high volume of sales,
certain items may take up to 28 days to be made and delivered. Please email item enquiries rather than phone. 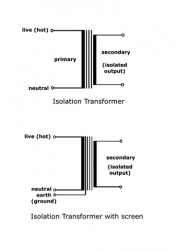 When selecting whether to buy an Isolating or Auto transformer consider the following:

Isolating transformers are where the construction electrically separates the input supply from the output by an insulation barrier. Commonly this type of transformer is used to convert the supply voltage to a different voltage level to suit the supply requirements of particular equipment, i.e. step-down or step-up. However 1:1 ratio transformers may also be used to take advantage of the transformer properties.

In an autotransformer, portions of the same winding act as both the primary and secondary sides of the transformer. The winding has at least three taps where electrical connections are made. Both the input & output share the same neutral.

The physical size of these transformers is smaller than isolation transformers of the same power rating and therefore they are cheaper.

Mostly used to convert an appliance originally designed to be used in another county where the voltage is different.

Protection of the equipment is still predominantly dependant on the supply distribution devices. Commonly they are used to convert supply voltages for similar systems e.g. a 230V UK supply to a 120V American supply.  Or 415v (two phases) to 230v